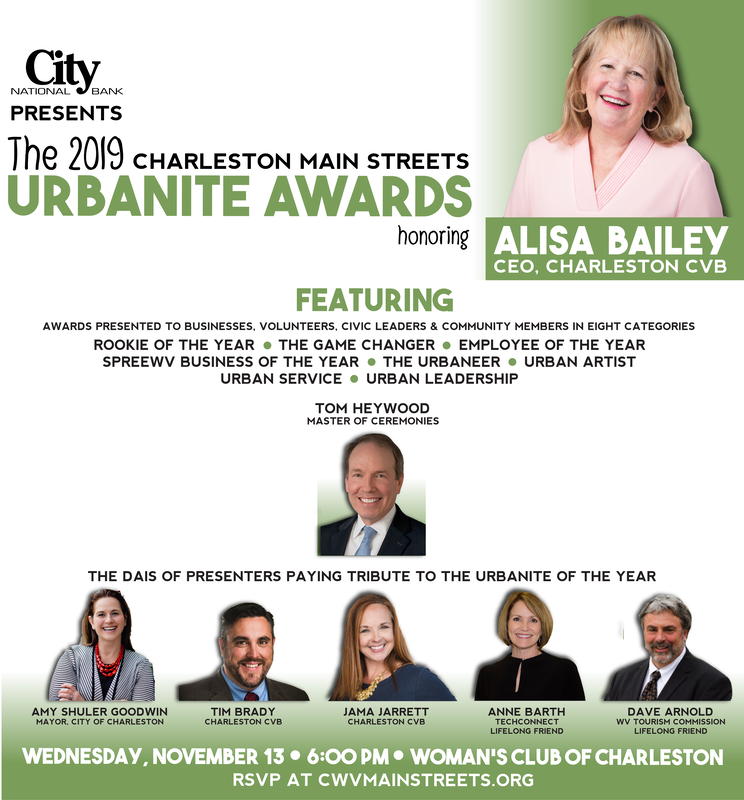 CMS is proud to announce the recipient of the 2019 Urbanite of the Year award: Alisa Bailey, CEO of the Charleston Convention & Visitors Bureau. A Charleston native, Alisa has led the main tourism branding agency of the city for the past six years and celebrates a career that spans over three decades. Alisa was appointed the first woman Tourism Commissioner and Bureau Chief of Commerce in the State of West Virginia and later appointed and reappointed by three Governors as the President and CEO of the Virginia Tourism Corporation. Her leadership and endless passion and enthusiasm that has resulted in major returns on investment for the East End, West Side, Charleston, and West Virginia will be celebrated on Wednesday, November 13 at 6:00 PM at the Woman's Club of Charleston.

Additionally, at the end of every year, Charleston Main Streets honors the businesses, civic leaders, volunteers, and community members that are working everyday to strengthen the urban core of Charleston. The Urbanite Awards commemorates a year of hard work and dedication, while acknowledging those who are setting the ultimate example in our city. Winners will be honored per district in eight major categories: Rookie of the Year, Employee of the Year, The Game Changer (Business & Property Owner), SpreeWV Business of the Year, The Urbaneer, Urban Artist, Urban Service, and Urban Leadership.